Where did it all begin?

Over three weeks of intensive workshops in summer 2017, a group of thirty young ambassadors created their own manifesto for the town’s future. The Embassy for Reimagining Rotherham (ERR) asked a group of local children and young people just that. They created a pop-up embassy in the town centre.  They talked to Rotherham residents about their ideas. The young ambassadors then presented the final results to an audience of local change makers.  Their manifesto went on to shape Rotherham’s cultural strategy. 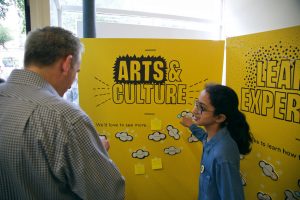 The Embassy has continued to meet after this, designing a ‘Big Conversation’ event that empowered young people from across the borough to share their thoughts about the town.  In addition, our young ambassadors consulted with families at several events in Rotherham, including at Rotherham Show in September 2018.

See more about what we did here.

Rotherham is officially launching its journey to become the world’s first Children’s Capital of Culture, with a never-seen-before festival of events aimed at children and young people of the borough. Rotherham town centre will be transformed into a playground for the young community during February half-term, with a skate and arts festival, demos by Olympic BMX champions, a giant spray-painting robot, live music, large-scale art installations, immersive exhibitions, and unmissable creative workshops and events! All of these events have been co-created with children and young people from Rotherham.

Here’s an overview of the Children’s Capital of Culture launch festival, as well as the other exciting projects and opportunities that are coming up over the next few months.