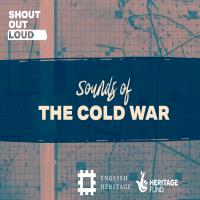 Sounds of the Cold War

Sounds of the Cold War was a series of free workshops which were run in collaboration between Shout Out Loud and Grimm & Co in the autumn of 2020.

In this project, young people aged 13-18 learned more about the history of the Cold War.  We began with a digital tour of York’s Cold War Bunker by a senior English Heritage Curator.

The young people learned oral history interview skills from researchers, testing them out on members of the Royal Observer Corps.  These people worked at the bunker during the Cold War, and the young people found out all about what life was like back then.  Drawing on these stories, the young people then collectively wrote their own scripts, imagining narratives which have taken place at the Cold War Bunker.

Working with sound engineer Charlotte Barber, they turned their scripts into high-quality audio recordings.  These will be hosted on the Shout Out Loud website and played within the bunker itself.  When restrictions allow, you will be able to visit York Cold War Bunker to listen to the temporary soundscape in the bunker itself!  In the meantime, have a listen here:


This project would not have been possible without the support of the following people.  We are so grateful to: