To launch our Young Creatives Network, we are offering you the chance to question three highly successful artists in the world of stage and screen.  Have you ever wondered how to write comedy?  Would you like to know what it takes to bring an idea to life on TV?  Do you want to know what goes on behind the scenes of a West End theatre?

If you are from Rotherham, aged 11-25, and have a question that you’d like to ask, we want to hear from you! Simply email youngcreatives@grimmandco.co.uk with your name, age and the question you’d like to ask, and we’ll put the questions to the people in the know!  Send them to us by 4th April 2022, and then keep watching.  We’ll post the replies on our YouTube channel.

This month, we are highlighting the wonderful Paul Clayton, Brian Jordan and Jeremy Dyson.  Read all about them below… 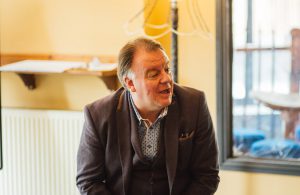 Paul Clayton is a patron of Grimm and Co. Paul is an actor, author, director, and producer of large-scale events. As an actor he is better known to audiences for his 10 years in the BAFTA award winning Channel 4 sitcom “Peep Show“. You may also recognise him from his stint in “ Coronation Street“ and “Hollyoaks“ with many other appearances on both the small and the big screen.

He is a former member of the Royal Shakespeare Company and has performed in the West End and at Theatres throughout the Country.

He is a patron of the Hope Theatre In London, Islington for 10 years and was Chairman of the Actors Centre in London, promoting and mentoring young actors.

He is also the author of two books on acting (“So You Want to Be a Corporate Actor” and “The Working Act”) and two thrillers (“The Punishment” and “The Hoax”). He is currently filming a large-scale television series for release in 2023.

TELEVISION: Brian has written on a wide range of television programmes; everything from eight years on BBC1’s Sport’s Personality of the Year to CBBC’s Rastamouse. As well as those two, he has also written Leonardo for BBC 1, Life Bites – Disney, Havakazoo – Channel 5, Nick Hancock’s World of Sport – Chrysalis and the BBC, May and You – Ulster Television, Out of Tune – BBC 1, The Wombles – CINAR FILMS & BBC 1, The Last Smoker in Britain – Channel 4 and a whole range of one-off episodes and sketch shows. He was the script editor/show runner for BBC1’s Onside.

RADIO: Brian has written and performed in a wide range of radio programmes with typically radio titles – shows such as You Cannot Be Serious Radio 5, Weekending Radio 4, Tamara Never Comes Liberty radio and Who Ate All The Pies EMAP ON AIR. He co-wrote and co-featured in both ’98 French Letters for the BBC and On Me Head, Sunday for TalkSport.

STAGE: Theatre credits include; Hard Boys In White Shirts at the Lyric Hammersmith, Dilemma for Murder Watermill Newbury, The Nearly Men, Selling Grace, Taking It Lying Down all for Sixth Sense Theatre Company, Who R U Talking 2 Greenwich and Lewisham Young People’s Theatre and The Lemon Conspiracy Watermill Newbury. 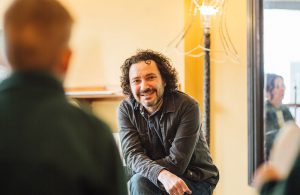 Jeremy is Grimm & Co’s writer in residence, and is an author, actor, director and screen writer. Jeremy is best known as the fourth member of the League of Gentlemen, mostly preferring to remain behind the camera. His published books include “The Haunted Book”, “Never trust a Rabbit” and “The Cranes that Build the Cranes”, winner of 2010 Edge Hill Award.

In 2010, he co-wrote and directed the supernatural-themed play “Ghost Stories” with Andy Nyman, which ran for over two years in London’s West End and has since seen further productions in China, Australia, Canada, Russia and South America. In 2011, his adaptation of some of the author’s best loved adult short stories, “Roald Dahl’s Twisted Tales” was produced by the Lyric Theatre, Hammersmith.