Get Up To Speed with Culture and Leisure!

On Wednesday 8th June 2022, staff and Young Producers from Grimm & Co spent the day at Magna Science Adventure Centre, getting Up To Speed with Culture and Leisure!  We joined businesses and organisations from across Yorkshire, to demonstrate the wide cultural offering available to young people aged 8-25.

Visitors to the stall were encouraged to join us in creating a communal story, giving us the next sentence in our story with the help of oversized dice with picture prompts.  To make things harder, they could only read the sentence that came immediately before!  Did you join us?  Can you see your sentence?! 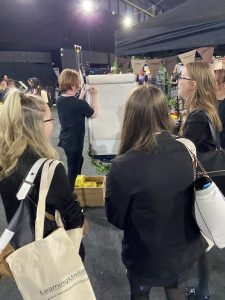 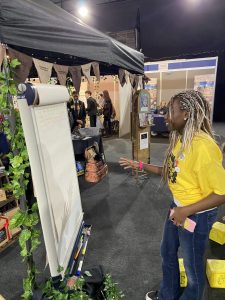 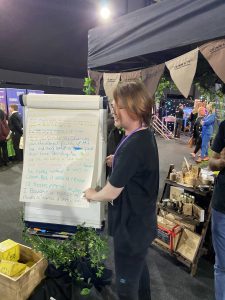 Beyond seven mountains and seven valleys…

a magical book appeared suddenly!  I looked at it and saw flowers that were both growing and changing colour simultaneously.  Then an apple fell on my head.  I looked over and saw a giant carrot and thought I was going crazy.  But fortunately, I had my pet rabbit, Harold, under my HAT!  Instant breakfast!!

Then, I had a lightbulb moment.  Harold hates carrots!  Harold would NEVER be able to eat the carrot.  I can read him like a book!  But he could drink the tea.  And you could tell by the look in his eyes that it was amazing!

All of a sudden, a light bulb came to my head.  And I suddenly remembered how to save the fallen crown. BUT there was a spider on the crown.  I had to kill it with a normal carrot, but a stroke of lightening came down and cut the carrot in half.  So, I called my mum because I was scared.  She picked me up on a witch’s broom.  She had a crown that crushed her, then she set eyes on a golden carrot that was birthed by a whale.  The whale was from The Royal Family of the Sea, and they loved to spend their time drinking tea.  A bat flew over holding a white daisy.  The bat was wearing a red hat, but he really wished it was a crown.  But it was a crown of thorns piercing his head.

I bought a bunch of flowers to impress a pretty lady.  I also bought a yellow car for her, but it turned out she didn’t have a license.  So I then bought her a book so she could revise and pass her test.  She violently crashed her car into a tree, but it turned out that she survived, luckily.  A cat saw the car and ran the other way, because the car was filled with carrots.  The car was so full of carrots the driver had to call for help on her phone.  But then she got hit on the head by an apple, and a whale had to come to save their life.  Then, the apple turned into a carriage, and the carriage had a hat.  The hat had a tree leaf in it, and a whale stole it.

A royal whale went on a voyage.  Whilst on their journey, they died due to a broom injury while their children watched.  Suddenly, a magical fish appeared to revive the fallen whale.

I’m on a train reading a book.  I looked up and saw Harry Styles.  He was wearing a multi-coloured shirt with flowers.

The evil fish regretted reviving the whale, so decided to kill the whale and Harry Styles.

The Whale Queen was having tea from her special teacup that gave her the worst hiccups ever!  The Queen finally ate an apple, but started choking on it.  Then she died.  Her crown fell to the ground with a thud, her reign was over.  The whole whale court watched and wailed, as a spider was found in the cup of coffee. The flowering vines consumed every inch of the corpse.  Their eyes glistened like glitter.

The witch sailed on a boat into the woods to steal the crown.  The witch feathered down on her brown and checked the time, and then she had a bright idea…

Use the carrot!  The boat was now a fierce dolphin, zooming through the sea like an envelope in the wind.  The glasses ran away from the fierce dolphin, and suddenly the phone rang.

I just sat there, with an apple, and drank my luke-warm tea, while I watched my pet whale die, and then the dead pet whale morphed into a light bulb.  Steve the spider was traumatised from seeing it.  It was a very sad time.  Blu the cat then ate the spider, and also ate the spider’s crown.  And then the spider committee wrote a strongly worded letter explaining the incident.

The man in the glasses read the letter and laughed until tears ran down his face.  His eyes became wide when… the book took a surprising twist.  This caused rage to fill his body, which caused him to flood to his car, and then thunder struck.

The witch, wearing her hat, went to her hut that was filled with potions and a cauldron.  She also realised that she had received a letter from the army, but what was in it?

The bats were flying round the room as she approached the letter.  The lights began to flicker when she opened it.  It was a letter from the Royal Guard inviting her to see… the magical bat that came to life at night.  The witch decided to put on her best hat, a rainbow hat with lots of sparkle.  When the witch arrived, the magical bat offered her tea.

Suddenly, a whale wearing a pair of glasses with pop-out eyes appeared, with a scary spider with legs made out of leaves.  The phone starts ringing – that ends up being a zombie.  The zombie had an idea, to jump on the broom to get the bat to eat the cat!  However, he couldn’t eat the cat because there was a Jedi Spider guarding them.  Then, they all start doing the Time Warp.  A fish suddenly jumps out and sings at the top of their gills.

I was hungry, and wanted to eat an apple.  When I ate it, it tasted like candy.  A spider jumped out of the apple and played basketball with eight basketballs and 8 hoops.  When the ball went in the hoop, it teleported to a field of flowers.  It hit another spider’s head when it appeared.

As the storm brewed overhead, a fish sipping a cup of tea isolated in his wonderful garden.  He had a swingchair in his garden and was surrounded by a flourish of flowers emitting a haze pollen.  As he looked at the time, he realised it was time for tea.  He was going to have tea in the woods with all his animal friends.

A fish was wandering through the woods and found a feather dangling a spider wearing a tutu.  Unfortunately, he didn’t have the time to stop and explore.  However, the spider in the sink was very happy because he wanted to scare people by dropping books on their heads.  However, the books kept magically turning into flowers. 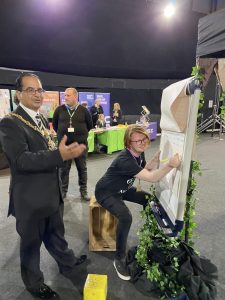 Get up to Speed with Culture and Leisure was co-planned and delivered by Trainee Creative Producers: a group of fantastic 16-to-25 year olds who are employed part-time to help deliver the Children’s Capital of Culture!Keep an eye out for more amazing events to come from the Trainee Creative Producers and their host organisations, which also includes Wentworth Woodhouse, Rotherham United Community Sports Trust, Gulliver’s Valley, and the Rotherham Metropolitan Borough Council Events team.This programme has been generously funded through the UK Community Renewal Fund.