In May 2019, thirteen children (aged 9-11) disappeared through a secret door hidden in our apothecary to the Magical.  Only now are we able to see the magic that took place during that time.

These thirteen children wrote a series of five linked short tales, giving Radio 4’s listeners a peek into the hidden goings on that take place in Grimm & Co’s magical other world. Its non-human cast includes an opera-singing toilet, a creaky floorboard, and a dastardly hat intent on robbing every bank in Rotherham.  The young writers wrote the 45-minute radio play in our series of free creative writing workshops.  They worked closely with the BBC production team to craft their play and went on a special trip to Media City, Salford, to get a behind-the-scenes insight into the world of radio. 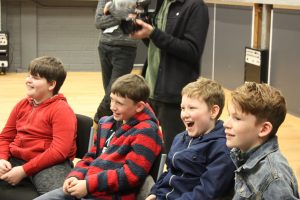 “I’m very proud to have helped provide an opportunity for the imaginative young writers of Grimm and Co to write for the most imaginative medium of them all (radio) and the best radio in the world (The BBC).”  Paul Clayton

“It’s wonderful that the children have been able to work so closely with Paul and Jeremy.  They will be able to hear the results on an international stage.  We are so proud of these children and their fabulous creativity.  It’s also a very funny script – I can’t wait to listen to the final version!”  Chair of the board, Sarah Dunwell.

Deborah Bullivant, CEO said “It’s an important aspect of Grimm & Co’s philosophy that the children’s writing is for a purpose and is able to be appreciated by others.  It gives children a meaningful reason to write.  Our children, the artists and the patron who made it all possible (Paul Clayton) have worked very hard on this.  It’s a beautifully produced outcome, performed by professional actors and aired for all to hear on BBC Radio 4.  I urge you to listen and I know you won’t regret it.  It’s absolutely stunning – please tune in and show the children you care.”