WOW Rotherham is a vibrant, colourful, bold, fun, and fearless festival celebrating women, girls, trans and non-binary communities, connecting Rotherham to other women and girls across the globe as part of the WOW – Women of the World family.  The festival took place on 16th and 17th July 2022, and Grimm & Co were honoured to attend with our story tent. 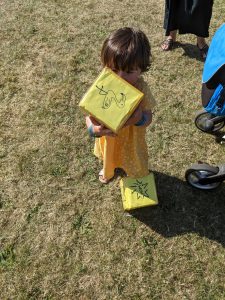 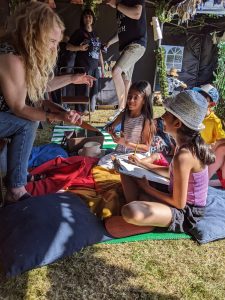 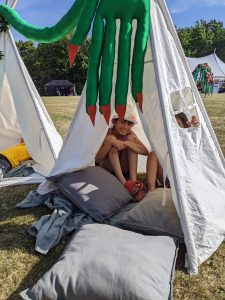 Mini-visitors to the Small Talk tent enjoyed sensory play with a sand pit, musical instruments and teepees, and a selection of books from our Forgotten Library was on offer for all ages. 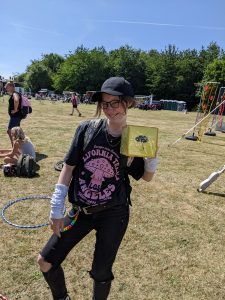 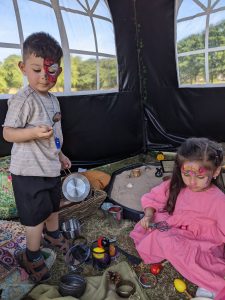 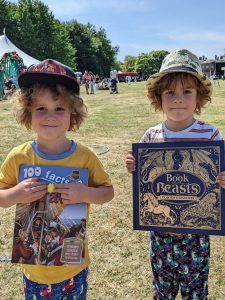 If you’ve been to the Apothecary recently, you may have seen Grizelda’s Hall of Fame, celebrating women in the mortal and magical realm.  Young people at the WOW festival developed this Hall of Fame, with contributions that included Anne Boleyn, Simone Biles, Malala Yousafzai, Arial, Pixie Verity and Mummy. 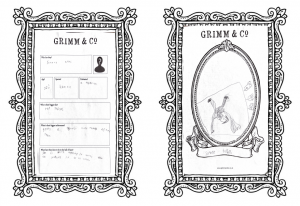 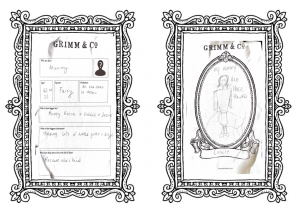 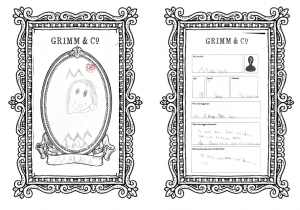 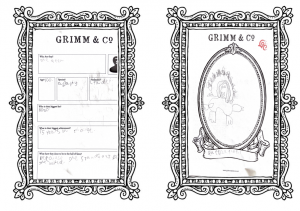 Visitors to the tent were also encouraged to join us in creating a communal story, giving us the next sentence in our story with the help of oversized dice with picture prompts.  To make things harder, they could only read the sentence that came immediately before!  Did you join us?  Can you see your sentence?!

Once upon a time, on a hot day in Clifton Park, Rotherham…

A flamingo flying, it went into a door. Behind the door was another dimension, where I heard a clap of thunder. There was a candle flickering in a dark tower, the only light that was shining through the darkness. There was a bowl of fruit sitting in the middle of the darkened room, and in that fruit bowl was a golden apple. The apple looked delicious. Should I eat it? While I was thinking that, I admired my cape that I made at the WOW festival. The candle started to flicker and made silhouettes on the wall. The map glowed orange in the flickering candlelight and landed in Timbuktu.

I went on a treasure hunt and found a map with a big cross on it – X marks the spot! After I came, I talked to a man at the WOW festival about it. Follow the map through the tents and continue the adventure. My feet were sore after looking for treasure, so I jumped in a car to get an ice-cream. After many miles of searching, alas, no ice cream van was to be found, so I had to go for a cup of tea instead. I sat on a toadstool and had a goblet of magical tea. Suddenly, a pair of boots hopped towards me with no-one in them! I could not leave the toadstool.

I’m at the WOW festival. I roll a dice and see Mom. My apple is big and soft (and a bit horrible). I stop for a rest and a cup of tea in the sun. It would have been lovely for us to have seen the kites flying, but unfortunately there wasn’t a breeze in the sky to hold them aloft.

But suddenly, from nowhere, came…

A giant teacup from space!

The giant teacup came crashing down, it landed in a smokey pile, and from it came a strange character wearing a unique watch. In the watch is a tiny pocket, and inside the pocket is a dice.

The smell of the forest mushrooms could wake up the hungry wolf.

Lewis the witch ascended wearing a watch and landed on a mushroom. He was the king fairy and gave the adventurer a map.

One leg in flight!”

The map had this message for you.

Then the map was delivered to a random person’s house by teleportation.

“Wow! What’s this?” said the flower fairy, “Let me light my candle to see properly. Oh yes, and I’ll take a seat on this mushroom stool to take a good look at … oh, it’s a map!”

Through the fairy’s eyes, she looks at the map to see a golden blob in the centre. She found a lit candle and shone it on the map to find a way forward into the field of flowers. She thought, “Which way should I go? I’ll roll a dice to decide.”

She chose a direction and found a wizard, but his magic malfunctioned and turned the candle into an apple. So, she ran in the other direction and found a leprechaun flying a flamingo kite. After that, they flew to a concert. It was a concert about a famous rat from Hawaii, who had found the world’s greatest cheese. To get to that cheese, he had to go through a magical door, which turned his watch into a magical watch that sent him into the future (to 2055) and cars were flying! There was a crown – you had to go through obstacles to get it.

Jerry jumped into a flying ‘teacup’ saucer, the old-fashioned design, something like an old grandma’s sofa design, span hysterically, dizzying him into unconsciousness. It wasn’t until lightning struck that Jerry awoke from his slumber. When he awoke, he was dazzled to see that his long-lost brother was laying on a sofa, unconscious, with tea spilled on the floor. An unconscious pixie lay beside it, her breath rattling unconsciously as Jerry muttered, “woah!!”

Grimm & Co. is a registered charity: Charity No: 1154990. Registered Company No: 8765731.
We use cookies to ensure that we give you the best experience on our website. For more information, visit https://grimmandco.co.uk/privacy/.I acceptRefuse third party non-functional cookiesPrivacy policy
You can revoke your consent any time using the revoke consent button.Revoke consent